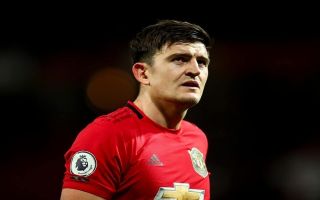 Manchester United star Harry Maguire has slammed the performance of the side’s attackers after the Red Devils’ 1-0 defeat to Bournemouth this weekend.

According to the Metro, Manchester United star Harry Maguire told MUTV that the Red Devils’ quality in the final third “wasn’t good enough” in this weekend’s 1-0 defeat to Bournemouth.

United academy graduate Josh King stunned his former club by scoring a sensational goal on the stroke of halftime, summer signing Aaron Wan-Bissaka made a crucial mistake when guarding the forward.

Ole Gunnar Solskjaer’s failed to perform in a similar manner than they did against relegation candidates Norwich City last weekend. The side struggled to show a cutting edge.

The England international became the world’s most expensive defender after the Manchester outfit signed him for a staggering £80m this summer, as per BBC Sport.

Solskjaer is facing an uphill battle in his bid to turn Manchester United’s fortunes around.

Here’s what the centre-back had to say on the side’s performance:

“We conceded at an awful time at a stage where we started the game really well.”

“The first 20 minutes we were well on top, we have got to score in that period, with numerous chances.”

“The quality in the final third wasn’t good enough to create a real clear cut chance, then they came into the game at the end of the first-half and it is an awful time to concede just before half-time, it is probably the worst.”

United’s chance creation was nowhere near good enough for the majority of the clash, the Red Devils piled on the pressure in the late stages but Eddie Howe’s men managed to stay calm with their backs against the wall.

Given the inconsistent performances of United’s forwards this season, it would be wise for the club’s hierarchy to sanction the signing of a bonafide world class striker in the January transfer window.

Solskjaer’s men need to be much more lively in the final third if they’re to meet fans’ expectations and help the Red Devils back to the top after years of mediocrity.