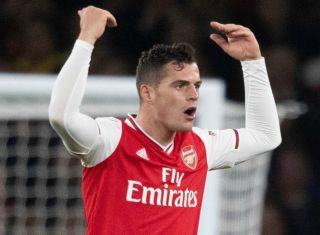 Arsenal captain Granit Xhaka has used his programme notes to re-post the message that he shared in midweek over his spat with the Gunners fans.

The 27-year-old reacted angrily last weekend as he was jeered off the pitch when substituted in the clash with Crystal Palace.

As he left the pitch he removed his shirt and stormed down the tunnel, perhaps doing more damage to his relationship with some fans as that ultimately wasn’t a great reaction especially from the club captain.

However, as per the club’s tweet on Thursday, he issued an apology of sort and detailed the abuse that he has suffered from online trolls which led to his furious reaction last weekend.

After Unai Emery opted to leave him out of the squad to face Wolves on Saturday, it remains to be seen when Xhaka is back in the side as ultimately there could be some tension next time out following on from the spat during the Crystal Palace encounter.

As seen in the image below though, the Arsenal captain used his programme notes to simply publish the same message he shared on Instagram during the week, noting that he hopes the Gunners faithful will respect that he wanted to share it once again on a different platform.

Time will tell what the reaction to it is and whether or not the Swiss international still has a future at the Emirates, as if he returns to action at some stage and receives a negative response from the supporters, that could be enough to persuade him that perhaps an exit would be the best outcome for all concerned.

Granit Xhaka’s programme notes today: “In these notes, I hope you will respect that I just wish to repeat the message which I posted on Instagram on Thursday.” pic.twitter.com/N0MuhEHpX0