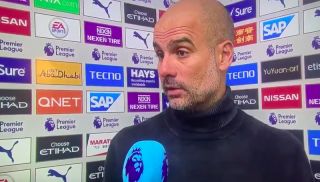 The Reds produced a dramatic turnaround against Villa to come away from the west Midlands with all three points in a match that could end up proving to be crucial in the title race.

It was a dramatic day for City as well, as they needed two late goals to beat Southampton at home, a result that means they’re still six points behind Liverpool ahead of their trip to Anfield next week.

And after the game, it seems like Guardiola took a sly, cheeky dig at Mane after the Senegalese international’s winner vs Villa at Villa Park.

As per journalist Kevin Palmer, Guardiola came and out called Mane a diver before then stating that he sometimes scores great last-minute winners in what was a backhanded comment from the Spaniard.

Pep Guardiola with a less than subtle dig at Sadio Mane: “Sometimes he’s diving, sometimes he has this talent to score incredible goals in the last minute. He’s a talent. Next week we go to Anfield to try to play them.” (BBC)

Shots fired… as they say on here! ?#LFC #MCFC pic.twitter.com/m9fCOTkk22

This comment was somewhat uncalled for from Pep, one that’ll surely going to add more fuel to the fire ahead of his side’s clash against the Reds on Merseyside next week.

We don’t know about you, but we absolutely cannot wait for it…