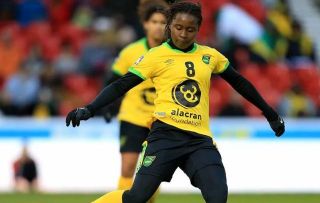 Jamaica international Tarania Clarke has reportedly died after a knife attack following a row over a mobile phone.

The 20-year-old plied her trade with Waterhouse FC in her homeland and had been capped three times by the Jamaican women’s side.

However, as noted by The Sun, that career and life has now tragically been cut short as it’s reported that she was attacked in Kingston on Friday night and was pronounced dead at the scene while police arrested a woman for the attack.

The news was confirmed by the Jamaica Football Federation and a statement was later released.

“The JFF mourns the loss of Tarania Clarke who was injured and sadly passed away last night having succumbed to her injuries.

“We express our deepest condolences to her family and friends during this very challenging time. Jamaica’s female football suffers a significant loss as she was a very talented player.”

While the police continue their investigation into the murder, further details have not yet been reported over the specific reasons for the attack, but there will no doubt be a period of mourning for Clarke now after her untimely death.