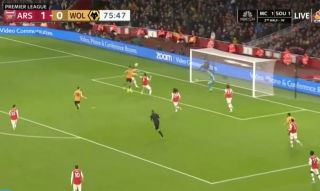 Arsenal showed just how weak they are at the back yet again today, as the Gunners conceded a sloppy goal in the second half of their clash vs Wolves.

Having taken the lead in the first half through Pierre-Emerick Aubameyang, the Gunners were pegged back in the second half after they failed to prevent Raul Jimenez bagging an equaliser with his head.

Despite there looking like no real threat, Wolves managed to get a cross in, with Jimenez meeting it, heading it home to draw the away side level.