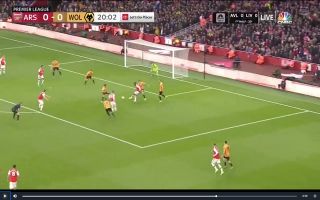 Pierre-Emerick Aubameyang provided the goods in his first appearance since being handed the captain’s armband. The superstar scored with a tidy finish vs Wolves.

Arsenal took the lead in the 20th minute of this afternoon’s Premier League clash with Wolves. David Luiz drilled the ball into Alexandre Lacazette and the Frenchman pulled off a brilliant turn before playing the ball into his strike partner.

Pierre-Emerick Aubameyang slotted the ball into the back of the net with a lovely composed finish. The Gunners have such a talented strike duo.

Take a look at Arsenal’s opener below:

Aubameyang is now level with Tammy Abraham and Sergio Aguero with 8 league goals so far, can the Gunners superstar get himself another Golden Boot this season?