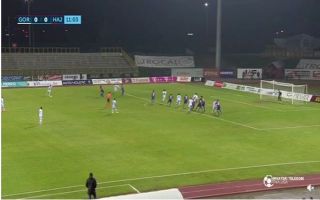 The recent injury to Vakoun Bayo and ongoing situation with Leigh Griffiths does mean that Celtic could do with some attacking cover. Whoever does come in might struggle to play when everyone is fit, so it would make sense to get somebody versatile to increase their chances of playing.

A recent story from The Celtic Star cited a Croatian football writer who suggested Celtic had been looking at Gorica forward Kristijan Lovric with a view to signing him. He can play either wide left or up top, so could provide some attacking cover now and even replace Mohamed Elyounoussi if he returns to Southampton.

There’s not a great deal of information or footage available of him, but he scored this stunning free kick today against Hadjuk Split:

Kristijan Lovric decided to beat Hajduk on his own tonight – this wonder-goal kicked off the scoring. Absolutely no stopping this. pic.twitter.com/r145LeepF4

There’s no indication that any sort of deal is close to being done, but if he continues to do things like this then Neil Lennon could be well advised to bring him in.