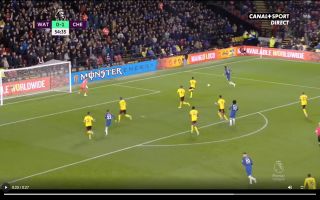 Chelsea have extended their lead against Watford in this evening’s Premier League clash with superstar Christian Pulisic getting on the end of a lovely team move.

In the 54th minute of tonight’s clash, veteran winger Willian showed that he’s still got plenty of fuel in the tank as he charged towards Watford’s defence before slipping the ball into Tammy Abraham.

The Chelsea talisman played a low pass across the box and Christian Pulisic got in front of his man to slot the ball into the back of the net.

Take a look at the American superstar’s goal below:

Chelsea are playing exciting attacking football under Frank Lampard. The Blues look as though they can carve open almost any defence in the league.