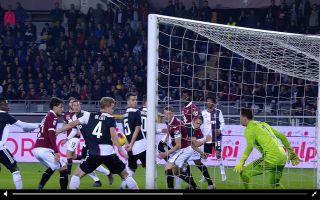 Superstar defender Matthijs de Ligt has appeared to get away with a “cast-iron” handball which should have led to Torino being awarded a penalty against Juventus.

In the 10th minute of this evening’s Serie A clash between Juventus and Torino, summer signing Matthijs de Ligt appeared to handle the ball – but the officials failed to award Torino with an apparent ‘cast-iron’ penalty.

After Tomas Rincon’s long throw-in into the box, the Dutchman appeared to handle the ball before clearing the ball in a dangerous area.

Check out some reaction from football fans to the incident:

De ligt yet with another handball…

Is there a possibility to tie de Ligt’s hands behind his back, no idea how he got away with that handball

How did De Ligt and Juventus got away with that? Handball for me..

In years gone by, that handball from De Ligt would have been a cast-iron penalty! I can’t believe it’s not been given. He survived one early in the season too.#Juventus #Torino

De Ligt and handball.. Love story of this season!!

De ligt clear handball again. Clear pen But not given. Serie a is so fixed.

The Italian league is just a joke man, clear handball on De Ligt and not even a penalty. Disgusting.

@IFTVofficial so disgusting the var and the referee un that call on the de ligt handball, but Mr marco messina dont twit shit about that

We can’t believe that VAR didn’t step in and overrule this decision, it looks like a clear penalty.