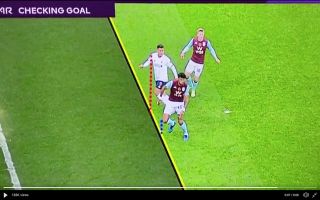 Liverpool fans have been left devastated after a controversial VAR decision ruled out Roberto Firmino’s potential equaliser against Aston Villa this afternoon.

In the 28th minute of this afternoon’s Premier League clash between Liverpool and Aston Villa, Roberto Firmino thought that he’d drew the Reds level before VAR controversially disallowed his equaliser for offside.

VAR ruled out the strike on the basis that Firmino’s shoulder was offside, but the replay of the decision has raised question marks.

The footage appears to show that Tyrone Mings’ knee is ahead of Firmino’s shoulder which would make the Brazilian onside. Martin Atkinson clearly didn’t agree.

Take a look at the VAR decision below:

Remember these graphics are accurate to 30cm pic.twitter.com/s5zESeC7eW

England legend and Match of the Day host Gary Lineker even had his say on the incident:

Firmino has had a goal disallowed for offside. He wasn’t offside but VAR decided he was offside. When it comes to VAR I’m now offside.