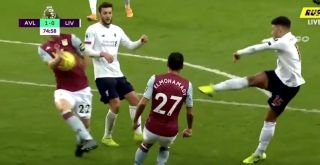 Liverpool were somehow not awarded a penalty against Aston Villa for handball this afternoon, as the Reds desperately searched for an equaliser against Dean Smith’s side.

The Merseyside club fell behind in the first half after a goal from Mahmoud Trezeguet, however they ended up turning the game around in the last few minutes thanks to goals from Robertson and Mane.

How that’s not a pen???
Fuck Off Var And all ref

Things could’ve been a lot easier for the Reds had the referee awarded them a penalty for a clear handball 15 minutes from time.

How VAR hasn’t awarded that, we don’t know!