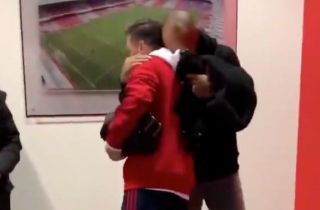 Mesut Ozil is back in the Arsenal starting line-up against Wolves on Saturday and he received a warm welcome from Thierry Henry before the game.

The German playmaker has struggled to make an impact this season due to a lack of opportunities from Unai Emery who has preferred other options.

However, he’ll get his chance to impress this weekend as he has been named in the starting XI to face Wolves at the Emirates, and time will tell if he can deliver to ensure that he now keeps his place in the side moving forward.

As far as confidence boosts go before a game, they probably don’t come much better than this for any Arsenal player as Henry shared a wonderful embrace with Ozil as he made his way to the dressing room, as seen in the video below.

It’s unclear as to what the pair said to each other, but there would undoubtedly have been a few words of encouragement from the Gunners icon as he hopes to see his former club put on a show and secure all three points to give everyone a lift after what has been a difficult week for all concerned.