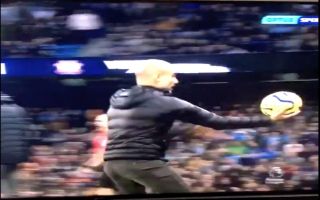 Some fans got to see a different side to Pep Guardiola during Manchester City’s 2-1 win against Southampton, he viciously trolled one of the Saints’ assistants.

The former Barcelona boss offered the ball to one of the Saints’ assistant coaches in order to get back at him for time wasting in the 60th minute of the clash.

Take a look at the hilarious incident below:

Southampton Assistant Manager holds onto the ball at 0-1 in the 60th minute.

Pep Guardiola gets the ball and offers it to the assistant manager while City are winning 2-1.

The title race is really getting to the Spaniard, he’s taking no prisoners now.