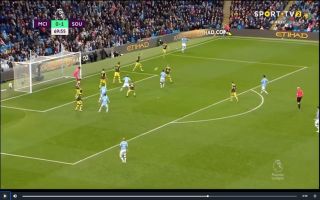 Manchester City talisman Sergio Aguero has scored a clutch equaliser for the Citizens in their Premier League clash against Southampton this afternoon.

Sergio Aguero has scored a crucial equaliser for Manchester City in the 70th minute of their clash with Premier League relegation candidates Southampton.

The Premier League champions were stunned in the early stages of the game, with James Ward-Prowse handing the Saints a shock lead.

Playmaker Kevin de Bruyne played the ball into Kyle Walker’s path and the England international drilled a low cross into the box.

Aguero looked composed as ever in a crowded box as he slotted the ball into the back of the net with a tidy finish.

Take a look at City’s equaliser below:

Man City's Aguero strikes to make it 1-1 at the Etihad #MCISOUpic.twitter.com/4MufxSlICu

Aguero will be hoping to fire the Manchester outfit to the Premier League title this season.