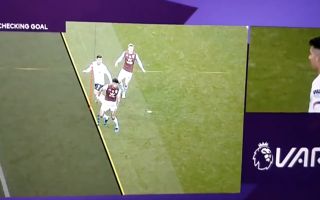 Martin Atkinson was caught well and truly in the act tonight, after a video emerged on Twitter that shows him manipulating the VAR call to prove Roberto Firmino was offside in Liverpool vs Aston Villa.

Firmino found the net in the first half, however the Brazilian’s strike was eventually ruled out after VAR adjudged him to be offside in the build-up.

Here’s the actual process of Martin Atkinson manipulating the lines until Firmino is made offside.
And he still cannot be offside as he can’t score a goal with his arm the eventual line starts from.
Shocking. pic.twitter.com/nTiVWUmSXY

However, it seems like the forward may have been onside after all, as the video above shows Atkinson manipulating VAR to show that the Brazilian was offside when he very much looked onside.

VAR goes from one mess to another….