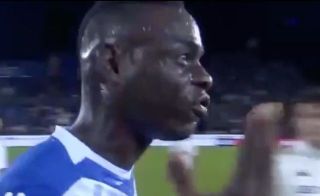 It’s fair to say that racism is society’s problem that sometimes rears it’s ugly head at football games. It can’t be expected that the football community can completely fix the problem, but so much more needs to be done.

There were more dismal scenes during Hellas Verona vs Brescia today where the game was temporarily stopped as racist chants were heard from the Verona fans. Mario Balotelli was the player who reacted to them and kicked the ball into the crowd.

Nobody can blame him for reacting so angrily to the fans. There will be some that say that just makes these people more likely to keep the chanting going, but there’s no support from the footballing authorities so players are left to try and take matters into their own hands.

We saw Bulgaria escape with little more than a slap on the wrists for the actions of their fans against England, and the Italian authorities have shown no appetite to take any action previously.

To make matters even worse, the Verona President came out after the game to say the fans were being ironic and not racist:

It’s completely heartbreaking to see and just beggars belief. It’s like he’s actually trying to condone the behaviour and will do absolutely nothing to stop future incidents.

Again, this isn’t football’s problem to solve, but it would be nice to see those in power actually make an effort to sort it out.