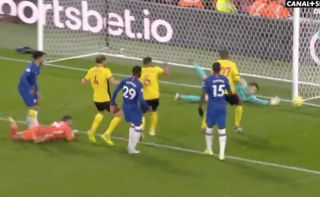 The Blues registered their fifth Premier League win in a row by beating Javi Gracia’s side 2-1 at Vicarage Road. Goals from Tammy Abraham and Christian Pulisic put Chelsea 2-0 up before Watford scored a consolation goal thanks to Gerard Deulofeu.

SEE MORE: “We’re in a really dangerous place”: Frank Lampard is the latest to take a shot at VAR after further controversy

The Hornets goalkeeper Ben Foster had a very good chance to score a late equaliser but his header was brilliantly saved by Kepa.

Lampard was all praise for the Spaniard’s terrific save. Speaking to Chelsea’s official website, the club’s manager said: “It was a brilliant save and we got what we deserved. Sometimes you need your goalkeeper to produce moments like that – that’s what they’re there for. Sometimes it can be a quiet afternoon and it certainly was for him today so I’m pleased for him. It’s great for a keeper’s confidence when those moments come.”

Kepa may have made only three clean sheets in 15 appearances this season so far but he has produced some fine saves between the sticks. The Spaniard has been an important reason behind Chelsea’s recent results and provided he keeps playing like this, David de Gea may have to be on the bench for Spain during Euro 2020.

Kepa will hope to produce another fine performance for the Blues in their next fixture against Ajax on Tuesday. A win for Chelsea will all but confirm their place in the knockout stages of the competition.