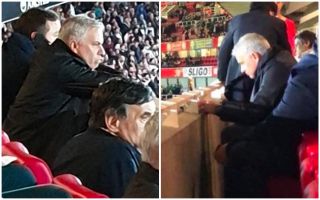 Former Manchester United and Chelsea manager Jose Mourinho has been spotted at a recent Arsenal game at the Emirates Stadium.

These pictures, which claim to show Mourinho at the recent Europa League clash between the Gunners and Vitoria, have emerged as reports hot up of the Portuguese tactician being a contender to replace the struggling Unai Emery.

MORE: How long Unai Emery has to save his job at Arsenal

He was at the Emirates the other Thursday pic.twitter.com/TtUmGDYTKs

It remains to be seen if this move will definitely happen, but Mourinho being at the north Londoners’ ground recently will certainly raise a few eyebrows.

Most Arsenal fans would probably not take too kindly to this appointment, though at the same time it seems increasingly clear that Emery was the wrong choice to replace Arsene Wenger.

It's not Raul. Here the pic from other side pic.twitter.com/Rk68B4ZMnJ