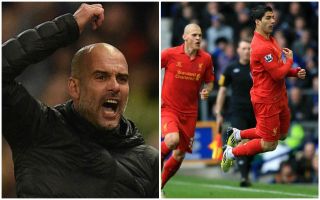 One Liverpool fan has responded to the controversy surrounding Sadio Mane and comments made by Manchester City manager Pep Guardiola by urging the Reds star to copy an iconic Luis Suarez goal celebration.

Some of you may remember that Suarez trolled Everton boss David Moyes with this diving celebration in a game at Goodison Park all the way back in the 2012/13 season.

When Mane scores against City he needs to celebrate in front of Pep Guardiola like this: pic.twitter.com/O6XnmkTmv8

Well, now Mane has the chance to become a real hit by doing something similar after these comments made by Guardiola about his diving…

While the comments were perhaps a little tongue-in-cheek, there’s no doubt Liverpool fans will feel aggrieved at Guardiola, who is surely attempting mind games in some way or another.

Mane scored a dramatic stoppage time winner against Aston Villa on Saturday to help LFC to yet another victory to keep them six points ahead of City at the top of the Premier League table.

But if the Senegal international could score against City next Sunday and troll Pep in the process – that would be drama unlike anything we’ve seen in the Premier League this season!