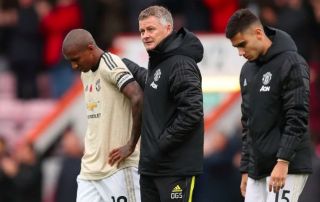 Manchester United manager Ole Gunnar Solskjaer has hinted he got his team selection wrong in the 1-0 defeat to Bournemouth on Saturday.

The Red Devils put in another poor display as their difficult start to the season continued with more dropped points in the Premier League.

MORE: Solskjaer becomes first Man United manager in 32 years to see his side do this as Red Devils lose 1-0 vs Bournemouth

Joshua King scored the winner for Eddie Howe’s side and United rarely looked like getting back into the game as their attack struggled to click into gear.

Speaking after the game, Solskjaer suggested he should maybe have started a few different players, though he didn’t name any names.

“When you get to places like this you have to take control of the game. We started really well first 15 minutes but then there was a lack of quality and we couldn’t get a goal,” he said, as quoted by the Manchester Evening News.

“The first goal was always going to be important. Every time you concede a goal it’s a bad goal to give away but it’s a bit of magic that wins the game, you’ve got to say that.

“Maybe I should’ve started a couple of others, who knows?”

Looking at the Man Utd bench, it’s not entirely clear who Solskjaer could have gone for instead, though there is perhaps a case for the Norwegian being a bit braver with his young players.

The likes of Brandon Williams and James Garner have impressed in recent outings and look capable of stepping up to Premier League level, but apart from that the United manager doesn’t have a great many options in this squad.