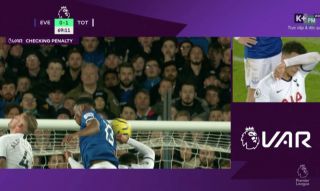 Loads of fans took to Twitter to hammer VAR this evening after Everton were denied a penalty following a handball from Dele Alli in the Toffees’ 1-1 draw with Spurs.

Everton fans will surely feel hard done by today, after their side were refused a spot-kick despite the ball hitting Alli’s hand in the box after the England international went up for a corner with Yerry Mina.

How is this NOT a clear handball??@premierleague, how has VAR decided this was NOT a handball and therefore not a penalty, after over 3 minutes of checking??!! #EVETOT #EvertonFC pic.twitter.com/VSeFxAY9jk

It was a very questionable decision from VAR, one that caused outrage amongst fans during and after the game on Twitter.

Do you think it was a penalty? Let us know down below…

The referee's behind VAR have been absolute disgrace this season.

• This goal by Firmino yesterday was given as offside.
• This handball by Dele Alli wasn't given as a penalty for Everton.

An absolute joke with the way technology is being used. pic.twitter.com/c4ykHZab1c

Indeed a joke. 100% handball on Alli. As always, VAR saves the day for Spurs

Delle alli VAR is a joke that hits his arm 100%

Christ VAR has got this Everton game all wrong. Blatant handball by Alli that was looked at for 4 minutes and not given as a penalty, then Son sent off for a shocking tackle that was actually made by Aurier. Joke

VAR a joke yet again. how was that not a penalty. dirty dele alli

VAR continues to be an absolute joke. Ball hits Alli's forearm in the box. Hand is an unnatural position. But, no penalty. What a shambolic system!
Guess it's only reserved for Laporte's hand.@premierleague@Everton#EVETOT

#EVETOT So City have a goal ruled out for ball touching Laporte's hand against Spurs, ball hits Alli's hand and no pen for Everton. VAR is a joke