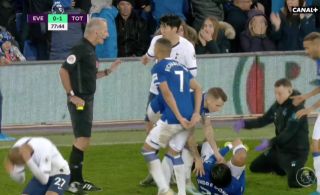 There were some awful scenes in Everton’s clash against Spurs at Goodison Park this evening, after Andre Gomes seemed to pick up a horrible injury after being tackled by Son Heung-min.

Whilst tracking back, Son went in to try and win the ball off Gomes with a lunging tackle, one that lead to the former Barcelona man picking up a truly awful injury after he collided with Aurier following the South Korean’s challenge.

It’s never nice to see scenes like this occur on a football pitch, and we here at CaughtOffside wish Gomes the speediest of recoveries.

Pictures via CANAL and Sky Sports