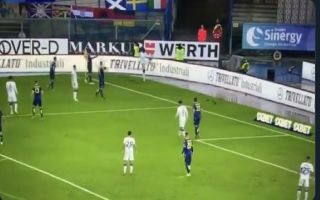 At some point something will eventually force the footballing authorities to take racism seriously. We all saw what happened with the disgraceful scenes in Bulgaria only for an absolute nonsense of a “punishment” getting handed out.

It’s a shame that most people won’t be shocked to hear that the latest problems have occurred in Italy. Mario Balotelli is well known to Premier League fans and has reacted angrily to racist chanting from the Verona fans, but can you really blame him?

The reaction of the Verona players round about him as they try to start some sort of scuffle is pretty shameful too:

The game was eventually restarted and Balotelli carried on as well, but we all know there will be nothing done about this yet again.