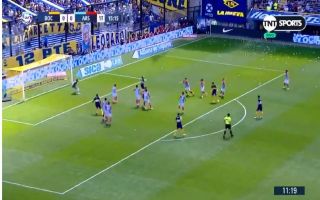 He still had a pretty incredible career, but it would be interesting to see how good Carlos Tevez could’ve been if he’d been a bit more professional throughout his career.

Initially he was an icon for West Ham and well loved at Man United, but it started to fall apart when he went to Man City.

He was a great player at The Etihad, but that incident where he refused to come off the bench completely ruined his legacy. He went on to do good things with Juventus before returning home to Boca.

READ MORE: Video: Is this how his career ends? Yaya Toure sent off after 10 SECONDS during his Chinese farewell

His time at Boca was interrupted with a disastrous spell in China. His bank account will appreciate it, but he was often injured and played badly. He will be best remembered for somebody working out his contract was so lucrative that he could burn a ten pound note and would’ve earned another one by the time it was finished.

He’s shown there’s still some magic in those boots. I’ll stop short of saying this was an acrobatic effort, but we all love a good overhead kick:

He’s now 35 but still plays regularly. He doesn’t look as fit as he once was, but he’s still got a bit of skill left in him.