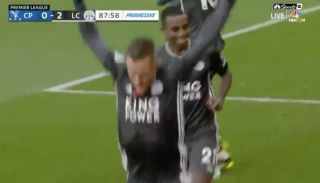 Jamie Vardy hilariously trolled Crystal Palace today after the Leicester striker celebrated like an eagle in his side’s 2-0 win at Selhurst Park.

Goals from Vardy and Soyuncu proved to be the difference between the two sides in south London today, as Rodgers’ side went third in the Premier League following their win.

After he scored his only goal of the match, Vardy mocked the Eagles by celebrating like a bird, flopping his arms around and all sorts.