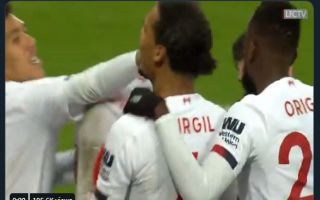 It seems that not every celebration is purely happy scenes with players hugging each other and giant smiles plastered on their faces.

It’s understandable that some of the Liverpool players might have been a bit pumped up after the late winner against Aston Villa yesterday. Roberto Firmino had reasons to be furious with the officials so probably had some aggression to get out.

This clip does make you wonder if he is happy with Mane’s goal or if he would rather fight Virgil van Dijk:

Is Roberto Firmino celebrating or challenging Virgil van Dijk to a fight? ?pic.twitter.com/zG1RMBhawA

Look at Firmino here full of passion just pushing Van Dijk’s face for apparently no reason. Some things are absolutely inexplicable, yet so natural to us when driven with emotions. I love how much it all means to them.#LFC#AVLLIV pic.twitter.com/oujxGTOiBK

You might think the first slap is accidental, but the pure aggression in his face as he goes for the follow up shove is pretty terrifying. It’s quite impressive that van Dijk doesn’t seem to flinch at all.