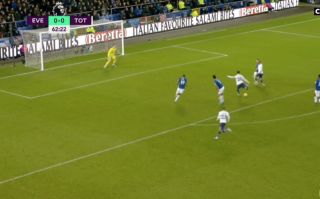 Dele Alli was on hand to open the scoring for Spurs at Goodison Park this afternoon, as the north Lonon side made Everton pay for a midfield mistake.

After Iwobi passed the ball back carelessly, it ended up at the feet of Son, who played in England international Alli, whose mazy run ended up with him opening the scoring for Mauricio Pochettino’s side.

It's a terrible error from Iwobi and Son feeds Alli to give the visitors the lead at Goodison Park.

It was Alli second goal of the season after he opened his account against Watford a few weeks back, and we’re sure Spurs fans will be hoping to see Alli use this strike as a booster and see him bag even more in the near future.