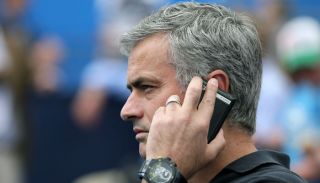 Bayern Munich have reportedly placed Jose Mourinho at the top of their managerial shortlist to be appointed as Niko Kovac’s successor.

As noted by BBC Sport, the reigning Bundesliga champions sacked Kovac this past weekend after their heavy 5-1 defeat to Eintracht Frankfurt.

Despite their success last season, it’s been a difficult campaign thus far given that they’re off the pace domestically and this latest defeat would have reflected badly on Kovac in particular.

In turn, their search now begins for a successor, and according to The Mirror, via La Gazzetta dello Sport reporter Nicolo Schira’s tweet below, the Bavarian giants have identified Mourinho as their top target to fill the void.

Mourinho has been out of work since leaving Manchester United last December, although he has been busy with promotional work and punditry roles since.

However, he will undoubtedly have been keeping a close eye on the landscape in European football and possible job openings, and so it remains to be seen if firstly Bayern do indeed offer him the job, and whether or not it’s a challenge that he’s motivated to take.

Given he has won titles in various other major European leagues including in England, Italy and Spain, perhaps the idea of adding honours in Germany to his collection will convince Mourinho over the opportunity, but time will tell if that’s the job that he’s been waiting for.

As for Bayern, it’s unlikely that they will make an announcement ahead of their clash with Olympiacos in the Champions League on Wednesday night, while they face Borussia Dortmund at home before the international break.

Perhaps that fortnight off will give them the time and opportunity to agree terms with their next coach, but it remains to be seen whether or not it’s Mourinho who is tasked with getting them back on track this season and securing more major trophies moving forward.

Now is official! #BayernMunchen have sacked Niko #Kovac. The first choice to replace him is Josè #Mourinho. All confirmed!
?????? https://t.co/68M7shhnSJ