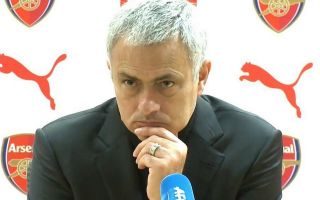 Jose Mourinho may be being linked with the Arsenal job at the moment, but if he ever gets it he’ll have a lot of work to do to win over the club’s fans.

Arsenal and Mourinho don’t have a great history, with the Portuguese tactician having spells in charge of two of their biggest rivals – Chelsea and Manchester United – and so often getting the better of the Gunners in his career in the Premier League.

On top of that, Mourinho’s old rivalry with former Arsenal boss Arsene Wenger is well known, with the pair arguably getting more heated at times than the glory days of the long-running Wenger-Sir Alex Ferguson feud.

Gooners will have been alarmed by a story in the Times claiming that Arsenal chief Raul Sanllehi is said to have recently had dinner with Mourinho, who impressed in talks over replacing the struggling Unai Emery.

And while many Arsenal fans will be keen to see Emery go, they won’t easily welcome Mourinho after so many of his old comments, including these flagged up by football.london.

Speaking after AFC beat Mourinho’s Man Utd side in 2017, the 56-year-old mocked the home support at the Emirates Stadium as he recalled how often he’d made them leave the ground crying.

“I’m happy for them (Arsenal fans). It’s the first time I leave and they’re happy. I leave Highbury, they were crying,” he said.

“I leave the Emirates and they were crying, walking the streets with heads low. Today they leave with their scarves.”

“It’s a big club. You think I enjoy a big club like Arsenal not winning trophies? I don’t enjoy it. But today I tried to win.”