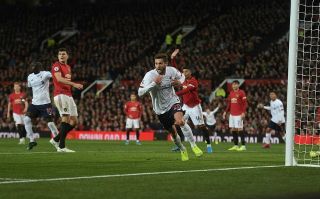 Liverpool star Adam Lallana has explained why he believes the Reds keep on scoring so many late goals at the moment.

As well as two goals to complete a late comeback against Aston Villa at the weekend, Liverpool have also recently snatched a late winner against Leicester City and late equalisers against Manchester United in the Premier League and Arsenal in the Carabao Cup.

This kind of never-say-die attitude could be crucial for Jurgen Klopp’s side as they chase the Premier League title, and indeed it keeps them unbeaten and six points clear in the league right now.

Lallana says there is great resilience and character in this LFC squad, as well as what he describes as a ‘sixth sense’ that they will eventually score, and that once they score one they can score another.

“We keep getting late goals. Another two today and one in midweek,” Lallana is quoted by the Daily Mirror.

“Then there was my goal at Manchester United a couple of weeks ago. The resilience and character is there in abundance.

“It’s almost like a sixth sense. We knew at half-time that if we could get one goal it could lead to another.

“Teams worry when it’s late. Even though we weren’t at our best in the first half we were saved by that never-say-die ­approach.

“Two goals in the last five minutes. We’ve just got that momentum. We’re just on that path at the minute.”

Liverpool fans will no doubt hope they can win some games more comfortably as well this season, but title races are often decided by dramatic matches like the one at Villa Park, and the signs are perhaps there that this team has that belief to snatch three points in almost any situation, no matter how challenging.