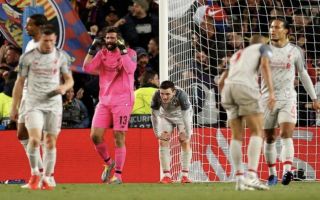 Liverpool goalkeeper Alisson has hit out at his team for conceding ‘stupid’ goals as they go on a difficult run without keeping a clean sheet.

The Reds are currently on a run of seven consecutive matches without keeping their opponents from scoring, though, in fairness, they have come up against strong opposition in Manchester United, Tottenham and Arsenal in that time.

They have also had to cope without injured centre-back Joel Matip, who had been one of the team’s most in-form performers at the start of this season and the end of last.

Alisson clearly isn’t too happy, however, with the Brazilian shot-stopper telling a press conference today, with quotes below from the Evening Standard’s David Lynch, that LFC have been letting in some ‘stupid’ goals and that they need to concentrate more.

Alisson asked about #LFC's clean sheet drought: "It is annoying when you concede stupid goals. Sometimes when the opponent scores with quality, you cannot do anything different. You need to accept that. I think we can do better in the concentration aspect, for example at Genk."

Liverpool fans will no doubt hope they can tighten up at the back soon as they had started to become a far more solid side last season after previously having a reputation for leaking some needless goals.

Alisson on Matip's absence: "We are not a weaker side when he's not playing. We miss him, he's a very good player. But I think Dejan is doing really good when he is playing, we also have Joe."