Manchester United are back in Europa League action this Thursday night as they take on Partizan Belgrade at Old Trafford.

The Red Devils won 1-0 away to these opponents in their last Europa outing, and can probably afford to play a similarly rotated side when they meet again later this week.

There are plenty of United players who’ve played a lot of games and who could do with a rest, with Marcus Rashford and Harry Maguire perhaps most likely to sit this match out.

This gives Ole Gunnar Solskjaer a chance to try a new strike partnership, with exciting wonderkid Mason Greenwood showing what he can do in this competition this season and surely deserving another start.

In a 3-5-2 formation below, we’ve gone for Greenwood in a front two alongside Martial, who has shone since his return to action and who tends to look at his most effective when playing up front with another striker. 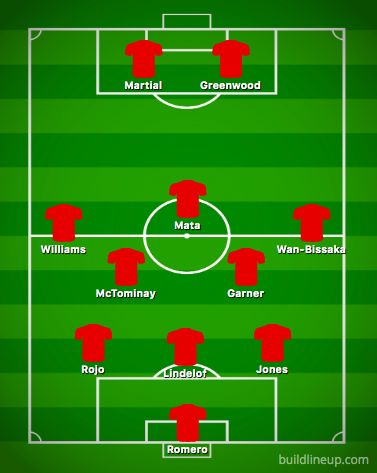 This kind of formation has served Man Utd well in recent times, with Solskjaer notably switching back to a back four against Bournemouth in Saturday’s 1-0 defeat.

Brandon Williams has looked another promising United youngster worthy of more playing time, so he could come in at left wing-back for this one, while we imagine impressive summer signing Aaron Wan-Bissaka could be one regular to continue to play from the start.

James Garner is another prospect who deserves a run-out in this competition, and we imagine he could partner Scott McTominay in the middle, with Juan Mata ahead of them in more of a free role.

This decent blend of youth and experience should give MUFC a strong enough side to pick up another much-needed three points in this competition without risking burning out the likes of Rashford and Maguire ahead of a busy period in the season.