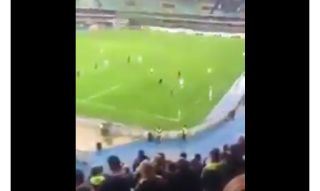 The former Liverpool and Manchester City star kicked the ball into the crowd and nearly stormed off the pitch as he was subjected to disgraceful monkey chants from a section of the home crowd.

This is one of the most disturbing videos I've ever watched. Verona fans waiting for Mario Balotelli to touch the ball so they can racially abuse him with monkey noises.

Can't believe this is happening in 2019. Absolutely disgusting. pic.twitter.com/yUWvFC0xwA

Watch above as this disturbing video clip shows how fans waited before Balotelli got the ball before continuing to try to wind him up with their racist chants.

It’s so depressing to keep seeing scenes like this in 2019, with racist incidents seemingly on the rise all over Europe, with football’s authorities simply not doing enough to tackle the problem.