Garth Crooks’ Premier League team of the week has landed – and it’s not too surprising to see some familiar faces in there from Liverpool and Chelsea.

These two in-form sides have had a number of their stars make these lineups over the course of the season so far, and regulars like Sadio Mane and Tammy Abraham are in once again.

They’re joined by team-mates Andrew Robertson and Jorginho, while reigning champions Manchester City continued to pile the pressure onto this season’s league leaders Liverpool thanks to a goal from Kyle Walker against Southampton, earning the right-back a place in Crooks’ XI.

There are some slightly more surprising names involved as well, however, as Bournemouth get two players in after Eddie Howe’s side enjoyed a 1-0 win over Manchester United.

Joshua King scored the winner in that game and defender Steve Cook also makes it into Crooks’ defence here, with Watford goalkeeper Ben Foster also in despite being on the losing side to Chelsea.

Here’s the latest BBC Premier League team of the week in full: 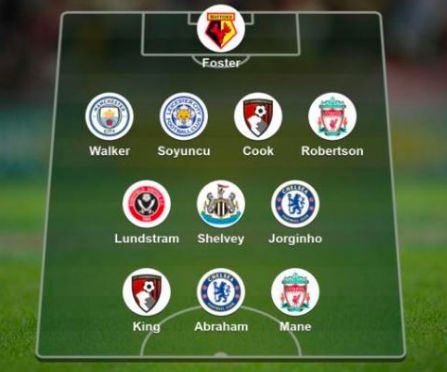