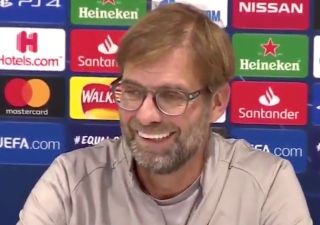 Ahead of Liverpool’s clash with Genk this week, Jurgen Klopp noticed something was missing from a reporter’s question in his press conference on Monday.

The Belgian outfit have a history of bringing through some top talent over the years with the likes of Kevin De Bruyne and Kalidou Koulibaly featuring for them before moving on.

Those two were specifically mentioned to Klopp this week, but as seen in the video below, the Liverpool boss had a priceless response as he noticed immediately that one key name was missing from the list mentioned by the reporter.

Divock Origi came through the youth ranks at Genk between 2001 and 2010 before joining Lille, and so Klopp was eager to remind the reporter that the ‘Liverpool legend’ was one major absentee from his list of Genk youth products.

While the 24-year-old has struggled since 2014 to establish himself as a key figure for the Merseyside giants, he scored some crucial goals last season to help them secure success in the Champions League.

In turn, he has earned himself a mention, and he has his Liverpool manager to thank for reminding this reporter not to forget his name when discussing Genk’s work with young talent in the future.

Liverpool host Genk at Anfield on Tuesday night hoping to secure three crucial points as they continue to try and establish themselves at the top of Group E ahead of Napoli.