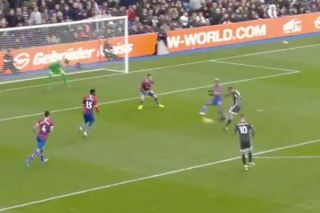 Leicester City have made a brilliant start to the campaign and their second goal at Crystal Palace on Sunday showed the quality football they’re producing.

The Foxes sit in third place in the Premier League table after 11 games, picking up 23 points which puts them just eight points adrift of leaders Liverpool.

They recently smashed their club records with a 9-0 win at Southampton, and some of the football that they’re producing under Brendan Rodgers has been sensational.

That couldn’t be more true of their second goal against Palace at the weekend, as seen in the video below, which shows the extended play which led to Jamie Vardy putting them 2-0 up.

It shows their 12-pass move which ultimately prises the hosts open and gives Vardy the chance to bag his 10th goal in 12 games so far this season.

From the patience to keep the ball moving to the quick, intricate passing to cut through Palace with speed and accuracy, it was a superb goal from start to finish and Rodgers is rightly continuing to receive plenty of praise for the job that he is currently doing at the King Power Stadium.

It remains to be seen if they can match their previous heroic achievements from their title-winning campaign not so long ago, but they certainly look a much more entertaining side this time round with Rodgers at the helm.

The build up to Vardy's goal vs Palace makes it one of the best team goals you'll see this season. Twelve passes leading to that goal.

What a job Brendan Rodgers is doing! ? ?