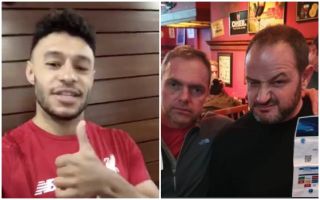 Liverpool ace Alex Oxlade-Chamberlain has confirmed that sponsors Standard Chartered have offered two fans tickets to their clash with Genk this week.

The Reds secured a 4-1 win in Belgium last month as they look to try and emerge from their group to quality for the knockout stage of the Champions League.

However, as seen in the tweet below, two fans who made the trip to Belgium for the game accidentally went to Ghent instead of Genk, and missed the game as a result.

Left red-faced and having had to count the cost of the travel, accommodation and match tickets, it would undoubtedly have been a night to forget for the pair, but they have now received a welcome bit of news.

As seen in the video below, Oxlade-Chamberlain has confirmed that club sponsors Standard Chartered have offered the two fans in question tickets for the home clash with Genk on Tuesday night to give them another chance to see the Reds in action.

He cheekily added that they’ll throw in a map of Liverpool too in order to avoid seeing the pair lose their way again, and so it’s hoped that they’ll eventually get the chance to see the clash albeit this time a bit closer to home.

It’s a classy touch from all concerned, and they will all no doubt be hoping that they’re celebrating a win on Tuesday night…

We don’t want these two making any wrong turns this week…so we’re taking them to #StandRed at Anfield ourselves! @LFC https://t.co/Gdqtn7WwkO pic.twitter.com/FsakauCO8Y