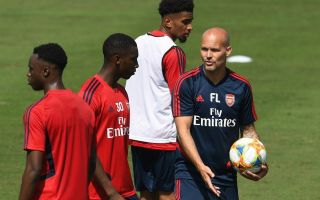 Some Arsenal players are reportedly snubbing manager Unai Emery and going to Gunners coach Freddie Ljungberg for support instead.

According to football.london, a number of the club’s players are gravitating towards the Swede due to their struggles to understand Emery’s tactics and instructions.

MORE: Arsenal hold talks over €25m midfielder transfer after being wowed by his performances

This sounds pretty damning for Emery, who has really not lived up to expectations since replacing Arsene Wenger at the Emirates Stadium last summer.

The Spanish tactician enjoyed success at Sevilla and Paris Saint-Germain but is now under pressure at Arsenal after some poor recent results and performances.

Ljungberg could well be a candidate to step in as manager temporarily if Arsenal do decide to part ways with Emery, and football.london’s report suggests he’s already playing a key role behind the scenes.

The 42-year-old was a star player for Arsenal back in the day and has now held several coaching positions with the north London club in recent years.

The former ‘Invincible’ has worked with the club’s Under-15s, Under-23s and was promoted to a first-team role this season.