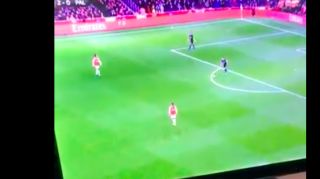 Arsenal strikers Pierre-Emerick Aubameyang and Alexandre Lacazette have been criticised for their total lack of closing down or pressing on Crystal Palace’s first goal.

Watch below as the strike pair walk lazily around as Palace easily get the ball out of their defence and break forward to start an attack.

This leads to Wilfried Zaha winning the penalty for the visitors that begun their comeback from 2-0 down to draw 2-2 at the Emirates Stadium.

Just a small thing I noticed watching the Palace highlights…look how easy Laca and Aubameyang make it for Milojevic to get the ball and start the attack which leads to the penalty. No idea how to defend. pic.twitter.com/bX0ndygxDZ

Aubameyang and Lacazette seem to have totally lost faith in Unai Emery’s tactics based on this evidence, with the Spanish tactician known to be keen for his players to press strongly and defend from the front.

This comes as Emery’s job looks at risk at Arsenal, with Mikel Arteta linked as a potential replacement.