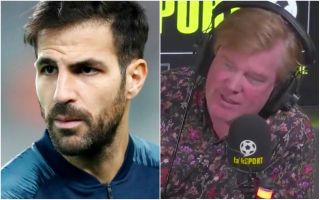 Arsenal legend Dennis Bergkamp was the subject of some bizarre criticism by talkSPORT host Adrian Durham – and another ex-Gunner Cesc Fabregas was having none of it.

Bergkamp spent the bulk of his career at Arsenal and became regarded as not only one of their greatest ever players, but one of the finest to grace the English game as a whole.

MORE: How William Saliba is already preparing for life at Arsenal

Durham, however, argued that he’s not even among the very best Dutch players to play in the Premier League as he argued the likes of Virgil van Dijk, Ruud van Nistelrooy and Arjen Robben have contributed more.

Watch below as the talkSPORT presenter explained his reasoning – claiming Bergkamp took time to get going and actually deliver trophies to Arsenal and when he did, still failed to help them retain a title or win the Champions League.

He also expressed his belief that the former Netherlands international is remembered for his hat-trick against Leicester City and a great goal against Newcastle, but not much else.

“If Bergkamp was so good, why didn’t #AFC win the Champions League or back-to-back titles?”?

“Never scored more than 20 goals in a Premier League season… he was there for 10 years!.”?@talkSPORTDrive fires back at Martin Keown in style on the Bergkamp debate? pic.twitter.com/1BV04HpwV1

Fabregas played alongside Bergkamp for two seasons in the Arsenal first-team before the former number 10 retired in 2006, and it’s clear the Spaniard believes this criticism is not justified.

See the tweet below from the Monaco midfielder, who suggests Durham has lost the plot with his harsh words about Bergkamp…

Is this guy serious? Lost the plot big time there. If you don’t think Bergkamp was that good, then you don’t understand this sport at all. https://t.co/6YrXiX2vnn 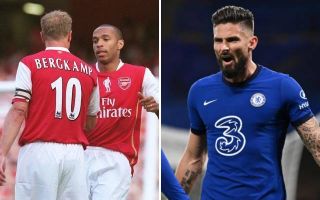