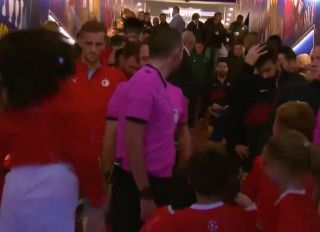 Barcelona were held to a goalless draw by Slavia Prague in the Champions League on Tuesday night in a disappointing result for the Catalan giants.

With the chance to move clear at the top of Group F, the reigning La Liga champions couldn’t secure the win at home against the side bottom of the table on a frustrating night at the Nou Camp.

SEE MORE: ‘Guilty, but not responsible’ – Wenger on Valverde’s role in Barcelona problems, why Griezmann is struggling

However, as seen in the video below, the mascots chosen for the game weren’t disappointed as they got to see their hero Messi up close as they waited in the tunnel for him to turn up.

While you can hear them excitedly look for him and eventually spot the Argentine legend, they were sadly left rather disappointed as he failed to acknowledge them.

Perhaps he did so after the video stops or he may just not have heard them as it wouldn’t be in character with the 32-year-old given the class he has shown on and off the pitch throughout his career.

Unfortunately for him though, many spotted it and went on to blast him for seemingly ignoring the youngsters, who would possibly have been left upset that Messi didn’t give them a moment to cherish having had a potentially once-in-a-lifetime opportunity to meet the great man.

It's the way they jump up and down with their hands over their mouths ? pic.twitter.com/3CKBNiKUE1

And he pie’s the lot of them

Look at them they hardly acknowledge them and look bored. Shamefull.

How’s it brilliant? he mugs them clean off ?

And he ignored them!

Imagine ignoring those children who are so excited to see you , that’s not good !!

Twat doesn’t even acknowledge them

What a twat! How much effort would it have taken to acknowledge these kids!