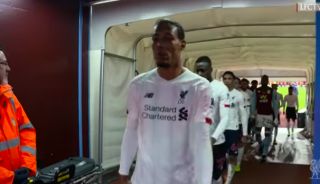 Liverpool defender Virgil van Dijk showed his winning mentality with his response to the dramatic 2-1 win over Aston Villa at the weekend.

Watch the video clip below as Van Dijk walks down the tunnel moments after this huge win and simply states: “It’s what we do.”

Jurgen Klopp’s side have certainly had a few dramatic results in recent times, including a few late goals to decide matches in the last few weeks.

Liverpool scored in the final few minutes to earn a draw away to Manchester United, and also needed a stoppage time penalty to get past Leicester City.

Some will question if LFC can carry on winning without playing particularly well and leaving it late, but many great teams have edged title races through sheer determination never to be beaten like this side is demonstrating.