Real Madrid are reportedly lining up some incredible transfer moves in upcoming windows as they look in need of a major revamp at the Bernabeu.

Los Blancos have long been known for their ‘Galactico’ signings under president Florentino Perez, who has spent big on some of the world’s best players over the last decade and more.

It remains to be seen if Real can realistically land all these names, but it’s claimed they’re chasing Manchester United and Chelsea midfielders Paul Pogba and N’Golo Kante, and Manchester City and Borussia Dortmund wingers Raheem Sterling and Jadon Sancho.

The Sun have put together a potential line up for Zinedine Zidane to field if he can land all these names, and it’s frightening how good Madrid could be if they’re successful in this spending spree… 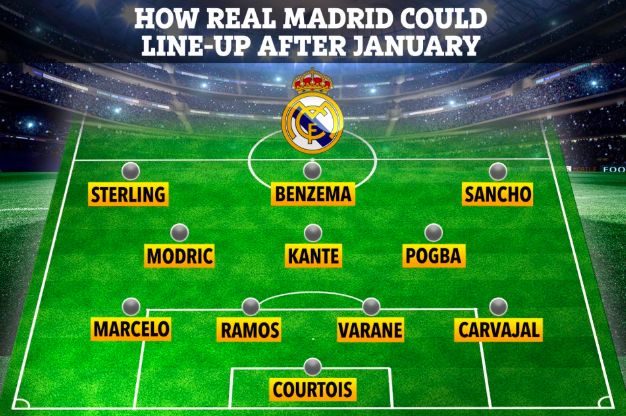 It seems incredibly ambitious for even a club like Real to get four players of that quality and that value in in January, but we’ve seen them do it before.

Incredibly, this would push out summer signing Eden Hazard already, with Sterling and Sancho up front alongside Karim Benzema.

Hazard has not made the best start since his summer move from Chelsea, and Sterling and Sancho do look like they could be upgrades in that position.

Kante and Pogba in midfield would be two immense additions to provide upgrades on under-performing players like Toni Kroos and Casemiro.

Zidane’s side won three Champions League titles in a row between 2016 and 2018, and a line up like this could deliver another by the end of this season.