Chelsea came from 4-1 down in the second half to Ajax to secure a share of the spoils in a thrilling 4-4 draw at Stamford Bridge in the Champions League on Tuesday night.

The Blues looked as they were heading for a defeat in a crunch clash with the Dutch giants as they opened up a three-goal advantage after 55 minutes.

However, Chelsea had other ideas as they came storming back and were helped by the fact that two Ajax players were sent off as Daley Blind and Joel Veltman were given their marching orders within minutes of each other.

It was youngster Reece James who found the back of the net to drag Chelsea level, and while they were left disappointed as Cesar Azpilicueta saw his strike ruled out for a handball in the build-up to what they thought could be the winning goal, the hosts would surely have been delighted to salvage a point from the encounter given the position they were in.

As for James, he made some club history on Tuesday as he became the youngster ever Chelsea goalscorer in the Champions League at 19 years and 332 days old.

He beat the previous record holder Arjen Robben dating back to when he found the back of the net back in 2004, and so it was undoubtedly a memorable night for the Chelsea starlet as he will hope to become a first-team regular under Frank Lampard and add more goals to his tally along with putting in impressive defensive shifts.

What a moment for Reece James! ?

The celebration is almost as good as the goal ? pic.twitter.com/ity7M00Gf2

Video: Pundit names the Chelsea star who has moved to “another level” ahead of Euro 2020 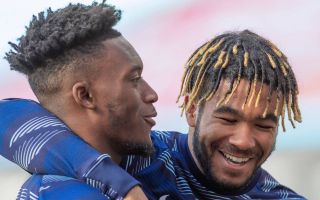