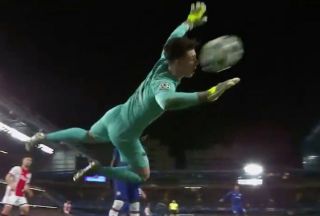 After their impressive win in the Netherlands, Chelsea look at risk of seeing it cancelled out by Ajax as the visitors took a 3-1 lead at Stamford Bridge on Tuesday night.

An own goal from Tammy Abraham gave the Dutch giants the lead after just two minutes, but Jorginho levelled things from the penalty spot shortly after to give the home faithful a reason to cheer.

However, it was short-lived as Quincy Promes put Ajax back in front before Hakim Ziyech thought he had made it 3-1 with a fortunate effort which appeared more like a cross than a shot.

Replays though showed that after hitting the post, the ball ricocheted off Kepa’s face and across the line and so it may well go down as an own goal against the Chelsea goalkeeper, as seen in the video below.

Unfortunately for him he clearly didn’t know too much about it, although perhaps critics will note that he should have done better to keep the initially effort out which would have avoided the situation entirely.

Nevertheless, it’s Ajax who are in a commanding position at half-time, with Chelsea having it all to do to turn things around and ensure that they don’t surrender top spot in Group H.

This about as unlucky as it gets ?

Hakim Ziyech's cross hits Kepa square in the face and goes in. Wait for the slow-motion replays… ? pic.twitter.com/NRJb5JHeQx

You hate to see it ???? pic.twitter.com/Xd7DdKg9Un

Kepa Arrizabalaga has just scored an own goal with his face to put Ajax up 3-1!#UCL pic.twitter.com/Gih3EFiomk

3 – Chelsea have conceded three goals in the first half of a Champions League game for the first time in their history. Shocked. pic.twitter.com/AXBdOXttM7

Image: Error-prone Chelsea ace only Blue pictured without a mask on as squad board flight