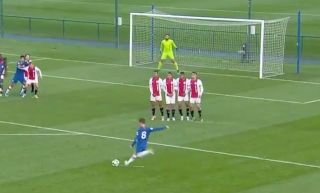 Chelsea U19s were in action on Tuesday as they faced their counterparts at Ajax in a UEFA Youth League encounter ahead of the senior sides doing battle in the Champions League this week.

Only one goal split the two sides at half-time, and as seen in the video below, it was certainly a classy one as youngster George McEachran found the back of the net with a sublime free-kick.

The 19-year-old has made 12 appearances so far this season at youth level for the Blues, but he had yet to bag his first goal. He ended that wait in style with a sweetly struck left-footed effort which flew into the back of the net giving the goalkeeper no chance.

With Frank Lampard giving young players who have come through the ranks at Chelsea a chance to impress this season, namely Fikayo Tomori, Mason Mount and Tammy Abraham all getting key roles, that will surely serve as great motivation for the youth side in general to try and kick on and grab the attention of the Blues boss as soon as possible.

For now though, McEachran will hope to build on this goal as it will undoubtedly give him a huge confidence boost moving forward but it remains to be seen whether or not it will turn out to be a winning goal.