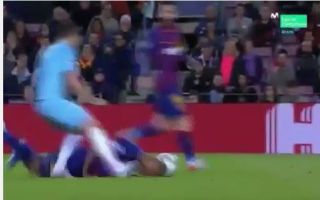 Some players become cult heroes at some clubs when they become known for putting their bodies on the line and doing all they can to ensure their team wins the game.

Barcelona are struggling at home to Slavia Prague in the Champions League, and if they don’t improve in the second half then Ernesto Valverde might find himself under even more pressure.

Still, at least he knows that his players are still willing to put their bodies and head on the line for him:

We’ll have what Arturo Vidal is having pic.twitter.com/mqwzpMKzq7

It’s even more incredible when you consider that Vidal hasn’t been a regular starter in the team this year. He does seem a likely candidate for a move in the January transfer window, so he won’t want to be picking up any major injuries.

Thankfully nothing bad happened and he will be praised for his bravery, but it could’ve been a totally different story if someone else was challenging for that ball.