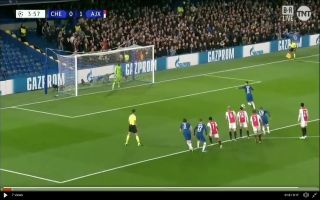 Chelsea managed to get themselves back on level terms against Ajax this evening almost immediately. Jorginho scored from the spot after Christian Pulisic won a penalty.

The Blues found themselves a goal down against Ajax less than two minutes into tonight’s Champions League clash as Tammy Abraham turned the ball into his own net.

Almost immediately after going behind, Pulisic used his trickery to charge into Ajax’s box and he was brought down by defender Joel Veltman.

Midfielder Jorginho confidently stepped up and put the ball into the back of the net, sending Ajax goalkeeper Andre Onana the wrong way with a perfect penalty.

Take a look at the equaliser below:

The Blues will be hoping to steady the game after a turbulent start – it’s not every day we get to see two goals in the first four minutes of a match.