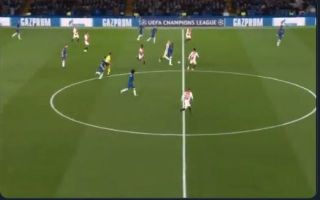 This could’ve been one of the most incredible and unexpected goals of all time, but Kurt Zouma reminded everybody why he’s a centre-back at the last moment by blazing one into the crowd.

He intercepts the ball at the back in fairly standard fashion, only to then dribble past the entire Ajax team.

READ MORE: Photo: The horrified look on Kepa’s face when he realises he’s scored an own goal vs Ajax

He shows some skill, pace and some lovely step overs to blaze past the last man and bears down on goal, but that’s where his luck ran out:

Unbelievable run from Zouma!! Would have been goal of the decade! Lampard’s reaction ?#CHEAJA #CFC

The finish probably sums up Chelsea’s night. It looked so promising, but they are going to come up way short. Ajax lead 4-2 and it looks like they aren’t done yet. Even Frank Lampard was laughing after Zouma’s effort.