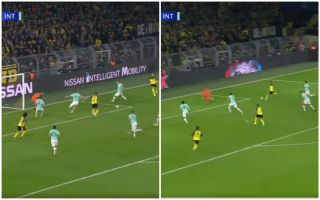 In the 51st minute of this evening’s Champions League clash between Borussia Dortmund and Inter Milan, full-back Achraf Hakimi pulled a goal back for the German giants.

The 21-year-old rolled the ball into the goal after a low cross. The ace’s strike was certainly inspiring as Julian Brandt made it 2-2 just 13 minutes later.

Hakimi completed a magical turnaround for Lucien Favre’s side after a brilliant link-up with superstar Jadon Sancho.

The marauding defender played a lovely one-two with the England international before slotting the ball into the back of the net.

Check out the youngster’s crucial goals below:

Hakimi is proving to be an amazing talent, he’s currently on the second year of his loan spell from Real Madrid.

Given his recent performances, Zinedine Zidane should be keeping a close eye on the youngster as he could be the long-term successor to Dani Carvajal at right-back for Los Blancos.